The only thing wrong with this picture is the light.  There was no light in the Knockmahoon  mine except for
the stink of the Tallow candles…after a blast the miners could barely see 6 inches of light.   So imagine this
picture with only a candle wedged into a bump in the rock.
1)  AT 6 A.M.  a bell was rung and the men began to defend the shaft ladders.  Men would step off
the ladders at various levels as the vein of Chalcopyrite  was vertical.   The deepest wa 800 feet
where the passageway extended under the ocean.   There were around a minimum of  370 men
on the ladders.  Perhaps many more   The total work force  is not accurate known.
The  descent was done in complete darkness.
2) Once at the level of their work  station the  six  man teams would pick their
way through broken but non mineralized waste rock to the face of  the vein. where they
would been punching holes using hammers and heavy sharpened  chisels.The punching
would be done as circular as possible sine the hole must be packed with gunpowder then
sealed with wet lay through which a blasting wick has  been forced.
3) Only the weak light of candles helped the miner get ready to blast chunks
of ore from the vein.  Not good candles.  Rather they were tallow candles that
the miners had to buy from the company.   The candles had two purposes…light, and
that was poor, and a test for oxygen.   If the candle would not light or kept  going out
then there was cause for alarm because the oxygen had been  depleted and the
miners could smother and  die without the candle warning.
4)  Then there was the  steady drip…drip…dripping as  ground water found its way to
the stopes and  passageways.  The sucking  noise of the water pumps was comforting
because it meant the water level was  under control.  If  the two steam
engines high above stopped then the deep  parts of the mine
would soon fill with water.  And that water level  would  keep going higher and
higher.  Miners could and did drown in these condition in mines around the world
but not at Knockmahon fortunately.
5) BLASTING: Gunpowder was stuffed in the  holes made by hammers and sharpened
crowbars.  The miners paid the  mine  owners to sharpen the  crowbars.  Once filled, the
hole was sealed with clay through which a length of blasting
chord had been inserted.  when the  fuses were  lit the crews  moved
well back into the passageways. safe distance.   All the teams are setting their
explosives around the same time.  Onc  fuse is lit soon followed
by  multiple  “Cracks, Roars and Rumbles” as the high grade  ore is loosened
from the face and tumbles to the floor,  “The smoke is so dense the miners cannot
see a single object more than six inches from the flame of his candle.”  “The smoke is
inhaled  by himself and his comrades.”
In this dark and unholy place  the men gather the copper baring  ore and  manhandle
the chunks, often quite  large, to the main shaft where a lifting mechanism hauls
it to the surface.   This  will occupy the teams for the next
twelve hours until a signal is gven and the men retreat in the darkness to the ladders
for the long climb out of the mine.  Young men first, Then those in their thirties and
finally the old men in their forties.  The pay was good though…better than any other
local occupation.
Before leaving the mine head frame arrangements and  payments had
to be made for the following  day.  Candles made  of animal fat would be
needed no matter how foul they smelled.  And  Crowbars had to be sharpened and
ready  for tomorrows shift.  Again payment had to be set
aside.
GOING ‘HOME’ AFTER 12 HOUR SHIFTS As the men gathered around the ladders changes in health became most evident.
At the  ladders that men  begin to fail.  THE sick and the infirm had to confront these
long wooden ladders.   In the dark a rung might be broken or the
ladders may swing as the human procession makes the 45 minute climb to the open  air.
This  was not easy even for the best of men.
Then they have the slow trudge to their homes some of which
are miles away in  the case of local people.   The newcomers…miners from Cornwall
for instance, lived nearby in  the one roomed botthans or in two roomed cottages
Many do not live in single family groups.  39 of the 70 bothers, for instance,  house
two families.  Take a moment to imagine what that must be like…wives and Children…no
privacy.  Religious leaders expressed concern about the morality ,.. rather  the immorality …that must
ensue from the human pyramids.
FROM WHISKY TO TEMPERANCE AT BUNMAHON Some  men…many men… did not go home directly.   Instead  they went directly to the pubs
There were 21 of them, perhaps more than that even.  “MINERS are a drnken and
improvident race,” cites Cowman from an observer of  miners social life.  One miner
was heard to say that he regretted he was unable to spend all his money on alcohol.
“The miners at Bunmahon,get great wages,” commented the Catholic courate of
Tramore, “but they spend their money very much on liquor.”
Payday consumption of whisky was estimated  at 300 gallons.    At lot of these
miners from Bunmahon and surrounding villages were very drunk a
lot of the time which played havoc with their family life.
Alcohol  consumption among these minters in the early 1840’s was  out of control.   And then
this  strange thing happened.  The Temperance movement reached the miners.   Now this was
unusual since these miners  were largely illiterate and  many were rejected  by the large
affluent society elsewhere in Ireland.   As one source stated, Bumahon was “a wretched”
community … poverty stricken.   The copper mine changed things.   Money flowed.  And
so did whisky …  for a while. Then came Temperance.   Some  Irish  had  a momentous change in their lives.
One family, for instance, were so impoverished  by alcoholism that they had no
furnishings. “Not even a pot to cook potatoes”/ Temperane leaders changed this remarkably.  Foremost was  the Catholic church but
there were others among the secular community that believed earnestly that drink was
the curse of society.  In Bunmahon it suddenly became unfashionable to drink.  Families
were strengthened.  Pubs went bankrupt.  As mentioned there had been more that 21
pubs in tiny Bunmahon.  This number dropped to one pub and several semi secret source
of alcohol.
The advertisement below for GREAT COZA as a cure for alcohol consumption is
fascinating.  I do not know what Great Coza was…perhaps you can fine out.  But the
advertisement from London,  England, was just one of the efforts to turn people away
from rampant alcohol consumption.  We are all familiar with the Gin Lane engraving
done by William Hogarth  in the 18th century.  Similar condemnations of alcohol spread through
the 19th century communities none I  might say  changed more dramatically than
Bunmahon. Another advertisement promoted  coffee drinking as one way to stem the flow of alcohol.   Maybe that
is what the Great Coza was. 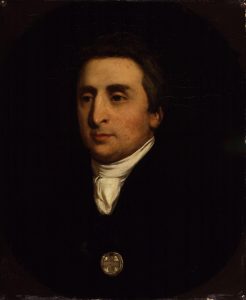 Portrait of Theobald Mathew by Edward Daniel Leahy
“In 1840 tea-totalling or temperance was high on the agenda in Irish society as new groups began to form to promote the abstaining way of life. Father Theobald Mathew, after whom Mathew Bridge was named during his life time was the tee-totalling reformer of the period. He was born in 1790 in Thomastown near Golden, Co. Tipperary and in 1814 he was ordained. As his brother-in-law William Dunbar operated a provisions store on Michael Street, Fr Mathew would often visit Limerick. Dunbar was involved in shipping large consignments from Limerick to Jamaica.On 10 April 1838 Fr Mathew founded the “Cork Total Abstinence Society”, which in less than nine months enrolled no fewer than 150,000 names. It rapidly spread to Limerick and elsewhere in the country and within a few years it spread internationally, the movement became known as the Total Abstinence Society or the Temperance Society. It was said that in Nenagh 20,000 persons took the pledge in one day. While 100,000 took it in Galway in two days, and 70,000 in Dublin in five days. At its height, in 1844, the movement had some 3 million pledges, or more than half of the adult population”
The most cruel of events happened in Ireland at the same time that the Temperance movement was
taking root.  What cruel event?   The 1846 Great Potatoe Famine.   One effect of the famine was
the total disappearance of the 70 bothers (one room houses) in the community of Bunmahon.
Where  did they go?  Many in Ireland died of starvation.   But through the whole period of the
great Famine, the mines at Knockmahon and Tankardstown were in full operation.  A mystery
yet to be explored.